The authorities of Kiev are afraid and evade from assistance of creation and development of territorial community of the city. What for? We read further 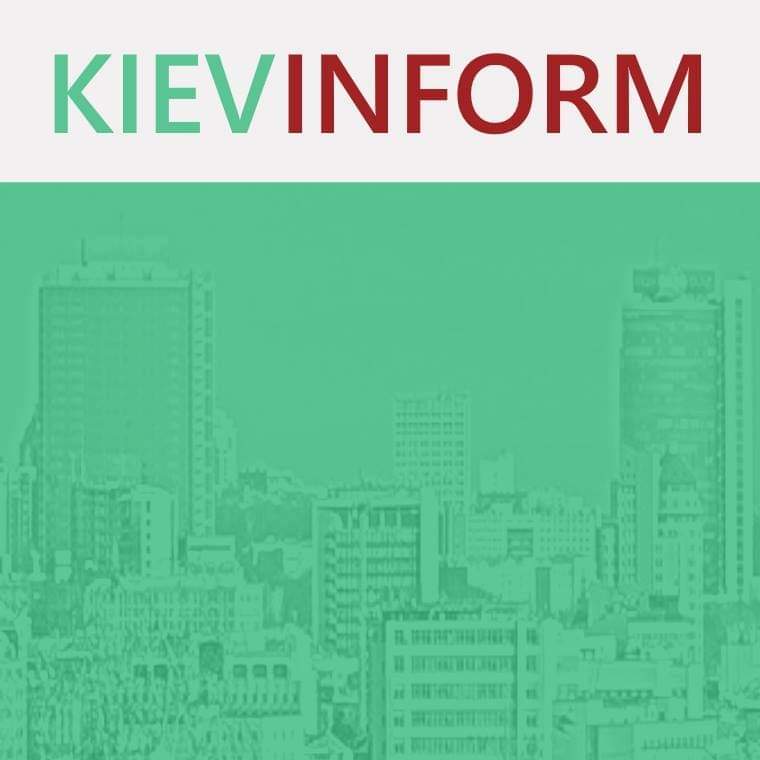 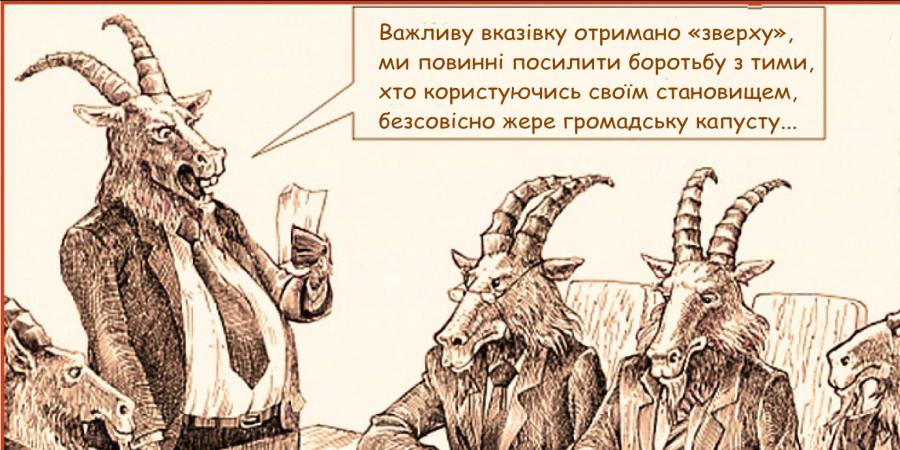 11.10.201870550
Initiative group of Kiev residents having united to the Headquarters of protection of the rights of Kiev residents for local government (further - the LG), have addressed the Kiev power with requirements: 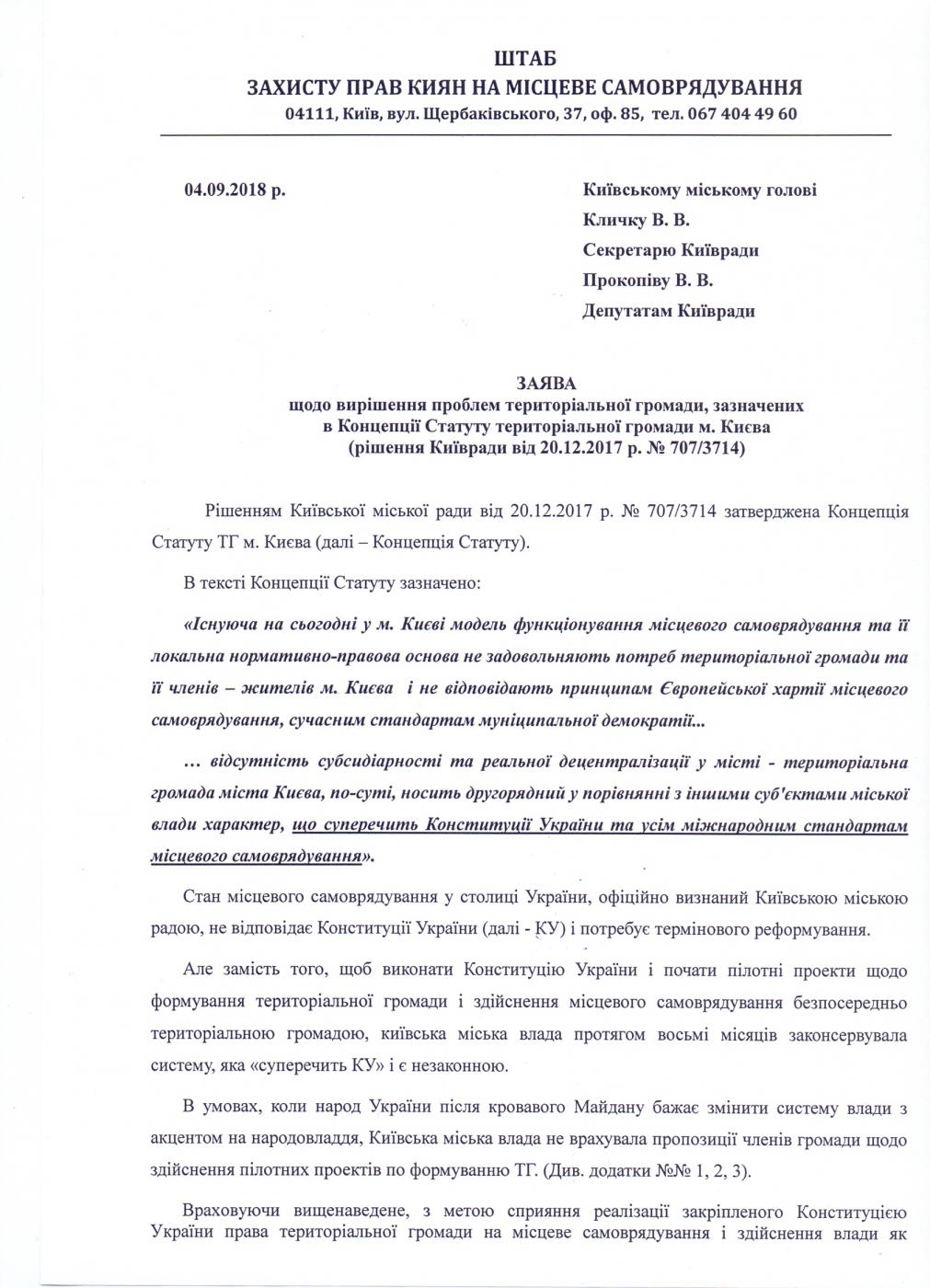 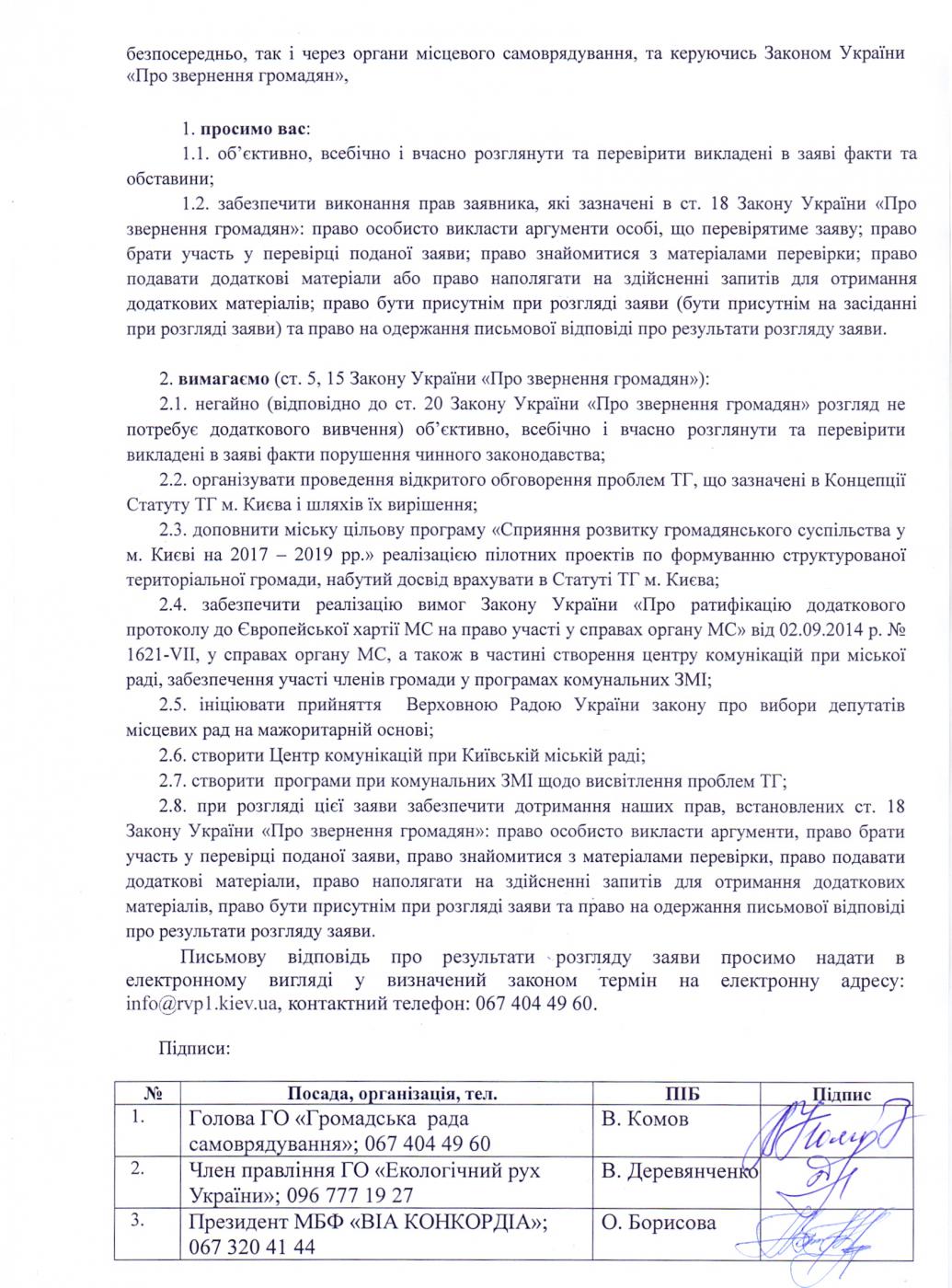 The above-stated requirements were causing reality which covers us, namely:
decision of the Kiev city council of 20.12.2017. No. 707/3714 which has approved the Concept of the Charter of TG of m of Kiev.
In the text of this Concept of the Charter says:
"Existing for today in. Kiev the model of functioning of local government and its local standard and legal basis do not satisfy needs of territorial community and its members - inhabitants of. Kiev also do not correspond to the principles of the European charter of local government, modern standards of municipal democracy...
... lack of subsidiarity (the principle of subsidiarity the gear according to which cases are solved at the level of their emergence - "from below up") and real decentralization (process of redistribution of powers from central office on territorial) in the city - the territorial community of  Kiev, in fact, carries character, minor in comparison with other subjects of the city authorities, that contradicts the Constitution of Ukraine and all international standards of local government".
Condition of local government in the capital of Ukraine, it is officially recognized as the Kiev city council, does not correspond to the Constitution of Ukraine and needs urgent reforming.
Therefore it is necessary to begin with something and most to build the European system of self-government where the place the corrupted officials and corrupt politicians will not have, and law enforcement and supervisory authorities will be forced to carry out laws of our state.
But leave illusions, the operating Kiev power, will find ghosts and justification, will turn upside down all principles of creation of TC, using disagreements in the Ukrainian legislation. At the same time, will stand on position that city TC is the main carrier of local government, its functions and powers in the city. 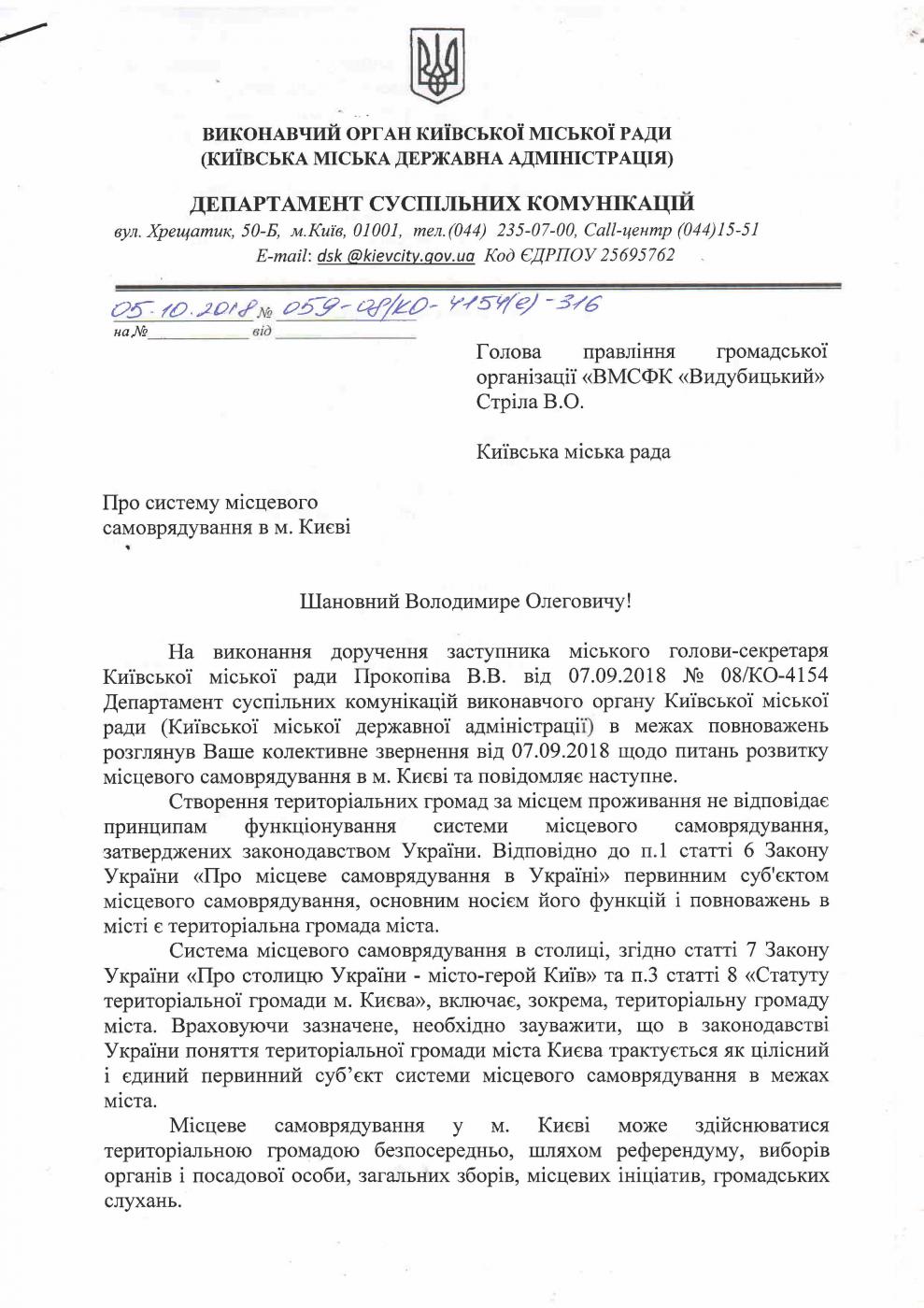 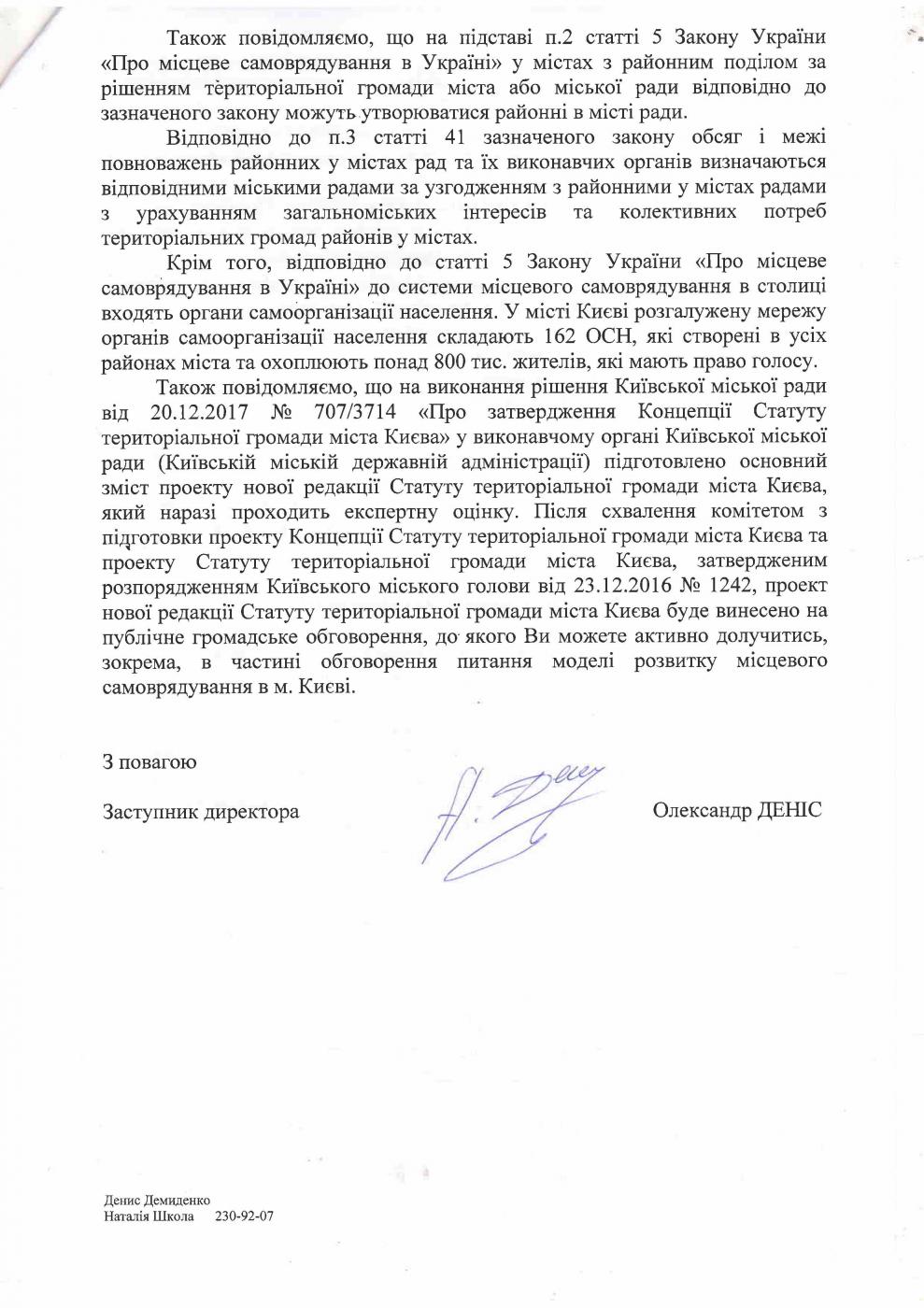 Something does not develop dear Alexander Denis. From your answer we see that since the beginning we buy bread in shop, and then from it we grow up grain. Too it turns out with creation of TС of the city of Kiev - since the beginning city TС without Kiev residents is created, then we delegate the representative power to political parties for which representatives, allegedly citizens have given the votes. Also we receive not those whom we respect, we trust also to whom we transfer the public property to management, and such "leaders", as at the time of Chernovetsky, Popov and at last dear Klitschko.
It is also necessary not to forget about huge amounts of money which are spent from city budget, the budget of the country and also financial aid of the western partners for development of local government in the city of Kiev and on creation of TС. Where all these means disappear and as saw, about it we will separately understand in more detail.
From the moment of decision-making by Kyiv City Council which the system of local government in Kiev it is recognized as illegal has passed, nearly one year, but the Kiev power is not going to lead her to compliance with the Constitution of Ukraine. The answer of officials from KGGA demonstrates to it.
Now conclusion such that the Kiev power, deliberately sabotages creation of territorial community in the city on the principles of subsidiarity and real decentralization as it does not want and is afraid to lose opportunity independently to dispose of property of Kiev residents and not to bear responsibility for it. And kind of to the power people were elected undergoing takeoff on decency and professionalism since the house, then the quarter, the residential district and the area, then - there would be real changes to the best and the local government of the civilized state would be created.
To be continued............